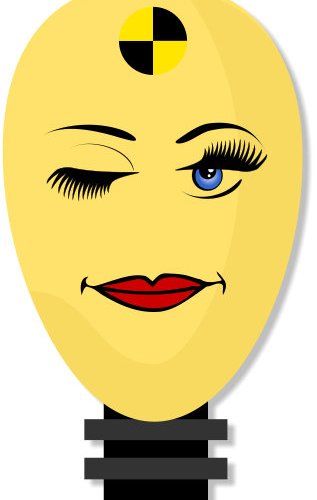 Dummies! No, we’re not talking about the nation’s political candidates. We refer to actual dummies– the crash test kind. (Quite appropriate, as this website is based in Detroit. Did we feed to our featured writer, Dave Petraglia, inside information?)

Petraglia’s story asks: What happens when a crash-test dummy desires a change? What kind of a change? Read “Crash Tested” and see. The story is very 2016!

In the process, Sean had skipped the childhood admonitions, the isolation and suffering, and found that in the catalog of human emotions and her reactions to them, she was not who she’d been molded to be.

Goomba travels the dance floors of Italian weddings, accepting gift checks through a slot on top. Notes the guest’s name and the number of zeroes in the amount. Then, somebody could either have a good time or get their ankle broke. It could happen. I’m just sayin’.

Assumeba keeps people from jumping to conclusions. Deployed in courthouses, it blocks the exits of jury boxes if the sworn have reached verdicts prematurely. Has special rubber wheels to help grip the slippery slope of illogical reasoning. Ejects copies of the judge’s revised instructions to the jury, when needed, from a slot on top.