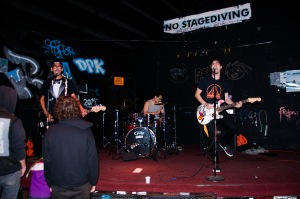 “They never sounded the same after that, no matter how much you wanna argue, how much shit there is worth talking about. Everybody knows, and yes, I’m including the band in this statement. Every one of those rich pieces of shit knows that it was all downhill after that first album.” Mickey’s on a roll tonight, and only Rube feels like arguing.

“Yeah, but to refine that sound and polish it up, make it so the message reaches more folks, instead of the same old gutter trash… There has to be something said for that.”
Mickey finishes his beer, before a gargling swell as the opening act tunes up. “You still don’t fucking get it man. I mean, this shit goes way beyond punk or post-punk or whatever we’re calling it now, whether it’s a return to form or something we’re all just a little too blind or deaf to recognize.”

“Right, but you do this to line your pockets. That’s how it’s always been for you. Even though you booked Nirvana or whatever, that still doesn’t mean you’re not doing this for your own gain in some way.”

“All this because I dig more than just the first album.”

“That’s not it,” Mickey shakes his head. “You’re allowed to like whatever ya like and throw it back in my face whenever ya feel the need. That’s what this shit is really about. That’s why I’m still here, sucking down my medicine, yakking like I know what the fuck I’m talking about, because we’re still angry about something, and maybe it’s as insignificant as your terrible opinion.”

“He’s really preaching now, better give him some room,” Rube jokes, only a few heads glancing up from their cellphone screens.

“There’s so much more to it, but I’d rather we skip the semantics, and I’ll just make my final argument,” Mickey suggests cordially.

“By all means,” Rube reaches for his pack of cigarettes before tucking one behind his ear.

“We all know what that first album is, why they made it, and why it still sounds so fucking good even to this day. It’s not hard to figure out; you just plug in and let it wash over you. I can still relate to the guys that made that record, where they were at that point in time, and why it hit me so hard. I’m still there with it, no matter what.”

There’s enough silence to ignore the subsequent feedback; Rube not sure how to respond at first. Even after all these years, he’s not accustomed to Mickey getting sentimental. “Ya know the more I think about it…” he begins. “The more I like the second record better. That’s the one that got me into them, and I don’t really care who they were then as people, because they were always destined to sell out and turn into pieces of shit. That’s how it is with all the greats.”

“You ignorant sack of monkey feces! Do you have…?”

The opener finally keys in and counts off; a mangled mix of redundant riffs and black metal howls interrupting the scholars in their padded corner of the bar. Des rolls his eyes and motions to the door. We head outside and wait for others to follow suit, but they’re all too anxious to hear anything, even if it doesn’t compliment their buzz. I’m not sure what to make of these cycling opinions; their sting only taking a moment before trailing us out. “And another thing you’ve failed to even consider is the influence of a producer on any studio album,” Mickey rambles. “That first one was just them in their fucking garage with a four-track machine; no mics, all balls!”

Des makes like he has to get something out of his car as we head down the block. “Those two should get their own podcast,” he says, struggling to light a Camel Red.

“Or maybe move in together,” I joke.

“So it looks like that phony piece of shit isn’t here yet even though he’s on next.”

It was only a matter of time before Des brought up Alvin Niessner; a feud I’ve humored on multiple occasions. My responses aren’t much different tonight, somewhere between supportive and completely indifferent. Sure, Des started his tortured but positive punk rock soul shtick a few years before Alvin, but the crowd has already spoken. We eventually re-enter to disillusioned twenty-somethings singing along out of key. They’ve sought solace in knowing it’s okay to be different, rocking T-shirts with twice-recycled slogans. 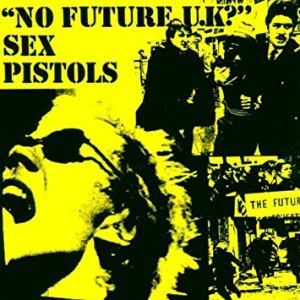 Clearly we’re not here for him, but that doesn’t stop Alvin from homing in on Des two seconds after his set. They hug and proceed to bullshit like Mickey and Rube albeit with less hostility. Alvin’s wife, Janice, soon joins to keep everyone at a respectable level, inviting Des over for dinner, anxious to show off framed portraits of Joey Ramone. Des loves the attention, suddenly anxious to collaborate. I drift to the bar and order another tall boy, unsure if there are any remaining lessons scattered in stories from the past. Maybe I just like the predictability of these nights, how by now, mostly everybody knows the words.

“Didn’t you used to be in a band?” A mousy girl with black eyeliner and red streaks interrupts my alcoholism.

“Yes, but that was a long time ago,” I wax poetically.

She’s Mable; a transplant from Cleveland now making the most of our little scene and all its blinding idiosyncrasies. Tonight was the first time she heard Alvin, and already there’s a future of plush bumper sticker sentiments reflecting shoddy neon in her pupils. I want to tell Mable to start taking acid and listening to jam music. She’d find a Bo with less disdain for the world, perhaps a little more honest, but equally-driven to waste away in front of shoddy speakers blasting guitar feedback.

I don’t know how to talk about my past failures, but still humor her until the noise interrupts us. She stands close, bobbing her head awhile, before slowly drifting up front. I consider ditching Des, texting some excuse tomorrow morning when all of these interactions feel irrelevant again. He’s never been the most stable individual, always searching for fans over friends. I don’t like it when people care about what I have to say. It automatically makes me think less of them.

“The last time I saw him play, he made my chills have goosebumps. There’s never been anything like it before or since.” Sylvie’s been a punk for too long; her hair thin and uncertain of what color it’s going for these days. There are old black and white stills of her in the crowd before this building became a respectable establishment. You can still see your youth in her eyes, but only if you really squint. I enjoy listening in when she’s hit the right level, speaking if only to be heard. The youngsters ignore another tarnished elder in favor of a better view, except we all know Davy’s gonna be late.

Maybe I’d be better not hearing these same songs again. They’ve already lost enough significance. Outside, there’s not a soul on the street, as if nicotine doesn’t hold a seat to anticipation. Perhaps I’m only cynical because I know what to expect, how this night will fail to live up to all the others, back when the Mable’s and Sylvie’s were properly enamored with the Des’ and Alvin’s. They believed every lyric was written for them; perfectly encapsulating their struggle through this grimy city after the foils of suburbia wore thin. I can’t place my head in the same blender anymore, ready to leave this spectacle in the dust.

“Hey man, you got a light maybe?” His grizzled tone pours into my ear from an unforeseen angle. Davy Layne looks like shit; a style he’s championed for the last thirty years. I take a few steps closer, not nervous so much as upturned. He lights a cigarette and coughs into his shoulder. “Thanks.”

“So they’re all waiting to hear me say something about what’s going on,” Davy exhales.

“Yeah, except it’s all the same shit from before, and I really wish someone would call me out for once, but maybe it’s just easier for everyone to show up like they’re gonna have a good time, ya know?”

“Yeah, well I’d rather they fight for something they believe in.”

“What do you even believe in any more, man?” I ask, skeptically. “How is playing here different than any other night somewhere else?”

“It isn’t,” Davy replies. “I’m not looking to change lives, just get paid, and here is where I can do that right now. I never said look to me for answers, but hey, if you wanna listen and buy a T-shirt, then by all means.”

“Ya know, I think a lot of people in there have just been waiting a little too long for the right mantra.”

“Doesn’t ‘fuck you’ hold up anymore?”

“Well then, maybe it’s time to try something else.” Davy flicks his cigarette on the ground, and turns down the alleyway towards the back entrance. I wait until they all go crazy, returning to the back and ordering one more beer. Des eventually finds me, ready to shake a fist in the air. I’ve seen this show before, every movement like a re-run edited for time and content. When will the revolution come and take us all away? It’ll probably be awhile, so I scan the merchandise for peace of mind.

Christopher S. Bell has been writing and releasing literary and musical works through My Idea of Fun since 2008.  His sound projects include Emmett and Mary, Technological Epidemic, C. Scott and the Beltones and Fine Wives.  My Idea of Fun is an art and music archive focused on digital preservation with roots in Johnstown, Pennsylvania. (www.myideaoffun.org).  Christopher’s work has recently been published in Anti-Heroin Chic, BlazeVOX17, Drunken Monkeys, Hobart, Queen’s Mob Teahouse, and Entropy among others.