I once lived with a black, snaggle–toothed, son of bitch named Mephistopheles. He was a cat. He actually belonged to this chick named Lilith. But to get him, I had to take her in too . . . so, I got that cat and the woman that came with him.

She was a good woman. She did the best she could with me . . . bailing me outta jail . . . cooking healthy meals . . . and listening to my drunken reveries. She was a good woman, as far as women go. But that cat! Now that was a cat! I was proud of my woman . . . but I was goddamned proud of that snaggle–toothed, old, alley cat! When I got up and drop-kicked that flea ridden cur out, I didn’t know where he went. I figured he went and mooched some milk off the neighbor Jonesy . . . then went to town to give the gal cats a pinch or two.

But no! It started with Jonesy! He came on over . . . shaking Miss Pearl (his white kitty) in my face. Miss Pearl was missing an ear. I said, “That’s the damnedest thing Jonesy. Didn’t Miss Pearl have two ears the last time I saw her?” “Goddamned right she had two ears!” said Jonesy, “Your son-of-a-bitch cat come over and ate the damned thing off!” I said, with absolute incredulity, “Mephistopheles?! Oh! Jonesy! That’s Lilith’s cat. You’ll have to talk to her about that.” I slammed the door real fast before he could see Lilith. Our house was very small. Lilith said, “Who was that?” “Darnedest thing Lilith,” I told her, “Jonesy is accusing Mephistopheles of eating Miss Pearl’s ear.” “Not my Mephistopheles!” answered Lilith. “That’s what I told him Lilith. Your cat wouldn’t do that.” “How come Jonesy didn’t come in and have coffee and cupcakes?” asked Lilith. “Ah, he was in a hurry Lilith.”

But it only got worse. Pretty soon every neighbor within a ten block radius came hunting us up. Little Cooch, Miss Montgomery’s cat, was missing an eye! Swore ol’ Mephistopheles had ripped it out right in front of her! And then he spat into the empty socket of poor Little Cooch! Just to spite Miss Montgomery! Right in front of her! Poor, dear, kindly Miss Montgomery. Jehosephat, Bill Bonebury’s mongrel cat, was missing a leg. Here he came with Jehosephat! Swearin’ to God that Mephistopheles had ripped off old Phat’s leg and had then made him eat it! His own leg! And Mephistopheles insisted on doing it all right there in front of Bill Bonebury! He’d seen it all! First rate witness! Nothing to leave to conjecture! It was Mephistopheles! No ands, buts, or ifs!

I slammed the door before Bill could see Lilith scoot by. “I’ll tell Lilith!” I shouted out to old Bill, “It’s her cat!” Lilith questioned me. “Oh, well, Bill Bonebury claims Mephistopheles ripped off Jehosephat’s leg and made Jehosephat eat it on up.” “Not my Mephistopheles!” said Lilith. But after seeing Porgy and Bess, Miss Kramer, the crazy old Catholic’s two pusses; the one missing his nose, the other spitting teeth, it got me to really thinking, “Holy Moses in the split river!” I conjectured, “This Mephistopheles is really something. My cat is terrorizing the entire town’s felines!” “Not my Mephistopheles!” barked out Lilith. All right Lilith, all right.

But then the cat was out of the bag. Lord have mercy on Mephistopheles’s wicked soul. Lilith and I flew to Washington State to see our parents for Christmas . . . her mama and my folks. We left Mephistopheles with my Aunt and Uncle in Jefferson City, Missouri. Aunt Mary had the biggest cat on the planet. Jumbo Buffcakes was his name. He was supposed to have whipped every cat in Jeff City, as well as all the cats along the I-70 corridor.

Poor Mephistopheles. He was sure to meet his match. I said farewell to the old scrapper with a tear in my eye. I figured we wouldn’t be seeing each other again. Not on this side of the curtain.

Lilith and I had us a fine Christmas up there in Washington State. I thought of Mephistopheles every once in a while . . . but it was just too painful. I pushed it back to the back of my noodle. I didn’t say anything to Lilith . . . about old Buffcakes and what he had probably done to her Mephistopheles. I didn’t want to spoil her fun.

You won’t believe what we returned to! The absolute horror on my Aunt’s face when she come to get us at the airport. She looked at Lilith. “Your cat!” She burbled out. “Ah to hell with this godforsaken planet!” I thought, “Poor Mephistopheles. He is of this world no more.”

But no! Hell no! It wasn’t Mephistopheles that was pushing up daisies. It happened this way: so ashamed of the ass whoopin’ Jumbo Buffcakes got at the paws of Mephistopheles, Jumbo went downstairs, into Aunt Mary’s basement, and he committed suicide! Hung himself on the girder! A dangling cat! My aunt was not a happy broad. “Not my Mephistopheles!” said Lilith. “Yeah, your Mephistopheles,” I told her, in my head, “That peckerwood is a monster! A serial killer!”

We got back to Festus, Kansas, with (my hero) Mephistopheles in his carrier. But . . . well . . . it was looking bad. The neighbors were all gathering about in front of our little house. They started shouting things. Their cats had finally started peaking their heads out from under the beds. They finally were getting used to the calm again . . . and here was Mephistopheles back in town. They’d heard me say that they wouldn’t have to worry anymore about that black and fierce feline . . . both in color and in color of his heart. I’d told them all! Spread the word! About Jumbo Buffcakes! How Mephistopheles had met his match! A goner for sure! No ands, buts, or ifs! No more Mephistopheles!

But here he was . . . back in town . . . looking all around. You could see it in his eyes. Which cat was gonna be the first to get their tail served on a platter? Lil opened his cat carrier. “Oh! Lilith . . . don’t do that!” I thought. Out came that snaggle–toothed wonder. “Mew! Mew! Mew!” Giving the neighbors a piece of his mind.

And there was my Lilith! Shouting at that mob . . . not making them kittenish over her . . . that was for sure . . . “Not my Mephistopheles!” The first rock buzzed past her head and through our front window. Lilith was a Wop. These town folk were getting a tongue lashing only a Wop can give. I knew she could handle them . . . the pack of cowards! For a bit . . . at least. Then I heard someone say that the farmers were heading into town . . . on a convoy of tractors . . . with guns and tar and that sort of thing. Mephistopheles was spitting. Lilith was hollering. And I was packing. Just the essentials . . . the record player and the records . . . then out the back!

I called Sargent Jeffo . . . my pal over at Fort Hayes. Told him the situation . . . told him to get over pronto . . . but discreetly . . . and if he could . . . to bring a few MPs . . . a truncheon or two. I got the records roped up and the player ready to go. I ran out to the front . . . rocks were sure coming at Lilith now . . . didn’t faze her! She was hollering some mad dog insults at them yokels . . . good thing them crackers were so lousy at throwing rocks . . . hadn’t been in too many riots I suppose . . . takes some practice. But they certainly seemed to be getting that practice! Their aim was improving! It was time to get Mephistopheles and Lilith inside! I hopped on the fire-spitting Mephistopheles, and tossed him in the carrier. He wasn’t finished giving those hayseeds the “what-for” . . . his, “I don’t care what happens to me! I’ll go down for my Lilith!” routine. I was thinking in my head, “What about me Mephistopheles?” as I got him and my screaming Wop back inside and behind the door. Windows are much easier to hit then yelling Wops . . . and them rubes were sure drilling our windows with bricks and bottles and brick brash. I pulled the curtains. I could hear the tractors! I could smell the oil a bubblin’!

Sargent Jeffo arrived in just the nick of time, with a van full of MP bruisers whom he immediately sicced on them townsfolks. Brutal! Those fellas were! Man! They went right at them clodhoppers! Boom! Shaka! Wham! Heads were being split open. Sargent Jeffo was shoving us in the van. But I was having a look-see as he did. Those bastards had wanted Mephistopheles’s snaggle–toothed head delivered up on a platter. But it was these yahoos that were seeing their teeth fly. Those truncheons were busy. Wham! Biff! Bang! Pow! Wham! Those were some brutal sons of bitches. No quarter given! No favor bestowed! Equally pummeled! Man . . . woman . . . or child! Smash! Wallop! Gaz-ing! Those bruisers knew what they were doing. Absolute mayhem! Boom! Whisk! Smash! Tugalamboo!

Today? Well . . . I don’t know much. I know that there are still some real hard feelings toward us and those fellows at Fort Hayes amongst the good people of Festus, Kansas. I know that Lilith is still saying, “Not my Mephistopheles!” . . . and I know that Mephistopheles is buried with special honors at the Baptist church on Garfield Street in Lincoln, Nebraska. I light a candle at his shrine every night. 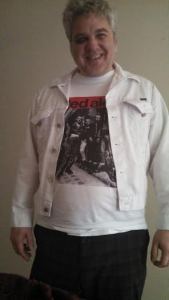