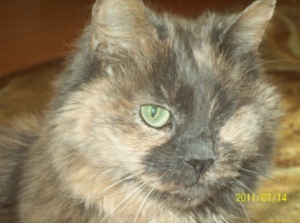 If he could only find a comfortable position, then he might get some sleep. But he couldn’t even turn over, there simply wasn’t any room. If he moved to the right, he’d knock over his water, if he moved to the left, he’d spill what was left of his food. The blanket under him felt stiff and dirty and smelled like urine. He shifted irritably. And that ungodly howling and yowling, it never stopped. He felt as if he were going mad.

But if he was such a good boy, then what was he doing in this cage?

He tried to focus and remember. Everything had been fine until Sheila came home that summer day, scratching herself non-stop, then wheezing and sneezing. Her accusing red eyes, like he was to blame. One minute she was stroking his fur, the next in tears, grabbing the scruff of his neck and before he could react sensibly, shoving him into that God-awful plastic purple carrier. He had tried to stay calm, anticipating another trip to that lunatic in the white coat, Dr. Frick, who had the obsession of sticking thermometers up there, of all places– but Sheila had other plans. Much to his humiliation, she had brought him back here.

Blinky had raised a grey eyebrow upon Donnie’s return.

“Sorry it didn’t work out, Donnie. God knows we’re not getting any younger!”

And Blinky was right. Donnie Darko wasn’t at the height of his youth like he was during his last stay. Instead, he was older and fatter, fur thinning– who was going to want him now? It had been hard enough to interest Sheila when she had visited the pound a year ago. He had to attack that boring old squeaky toy to get her attention, and extended his paw through the bars of the cage towards her longingly.

God he hated her.

He really didn’t know how much longer he could go on like this. But what was the alternative?

If only he had some catnip, some really good quality, yes, Cosmic catnip. Then he could forget for awhile. Sleep.

At seven the next morning, Donnie woke up to a cacophony of barking, meowing, howling, and crying. Food and water dishes were empty, blankets dirty. Every morning it was like this.

Then the door opened. It was the volunteers, Sam and Marcy.

“How’s my darlin’s today? How’s my babies?” Sam called out in his musical voice. One by one, he took them gently out of their cages, handing them to Marcy while he cleaned the cage and put in a fresh blanket, a new toy, and food and water.

“How’s my boy, Donnie Darko today? Is today the day, my man? You gonna blow this pop stand?”

Did Sam know something? Donnie was afraid to hope. Donnie enjoyed Marcy’s caresses while Sam cleaned his cage.

Why couldn’t Marcy or Sam take him home? They loved him. They always spent a little extra time with Donnie. He purred in Marcy’s arms.

Donnie woke later that afternoon to the hopeful jangling of keys.

“Somebody has a visitor!” sang Pete, the attendant.

Donnie sprang up and began to meow. He knew the routine. Purr, cuddle, roll around, all that lovable stuff. Maybe touch a paw to their face, or something adorable like that. It was humiliating, but he’d do anything to get out of this hellhole.

But the attendant passed Donnie’s cage and went on to Trixie, the bleached blonde poodle.

“Awwwww, isn’t she sweeeet. I have to have her!”

Donnie wanted to puke. Trixie? That washed up has been? He couldn’t believe that she was getting out of here before he was. The door slammed shut, the lights switched off.

“If I had only left that pot roast alone, maybe things might have been different– ,” said Febe, the overweight beagle.

Oh God, not the stupid pot roast story again. Everytime somebody got adopted, Febe had to go on about that pot roast.

“You know, I was hungry. Alright? I admit it! It was hot out, I was out on my walk, and I found a goddamn pot roast in the trash! What was I supposed to do, just leave it there? I mean a pot roast? Anybody’s dream! I mean did he really think hosing me down was going to make me drop that delicious roast? Yes, I lost my temper, I admit. But how long do I have to pay? I mean I’m a beagle for god sake! Everyone loves a beagle! Right?”

“God, Febe, shut up, we’re all in the same boat. And it ain’t Noah’s ark,” said Blinky, coughing.

“Hey, Donnie, what was your last place like? Was it nice?” asked Blinky.

He knew it was nice. Everyday about this time, Blinky wanted to hear about what it was like on the outside. Gave him hope, Donnie guessed.

“Well, everyday I’d wake up next to Sheila, stretch, and jump up on the stool by the window and stare at the little red bird. And that bird was red—really red. I’m tellin’ you, one day I was so close to getting out and chasing her– ” said Donnie.

“Stick to the story!” said Blinky.

“Anyway, after I’d stare at the red bird for an hour or so, I’d go over to my food bowl, it had my name on it—and was always overflowing with food– ”

“Well, it wasn’t pot roast, but it was that really tasty Purina Cat Chow. And there was always piles of it, it never ran out.”

“Anyway, after that, I’d get kind of moody, and run all the way from the basement to the top of the house, skidding around the corners on the rugs, and then back again, and again, til I was out of breath and tired, then take a nap on the bed by the upstairs window, where I could watch Scooter the squirrel until I fell asleep. God, those were the days.”

“Oh, and the litter box– I had a really big, roomy one, filled with clean litter as fine as sand on a beach, not like this gravel they have here,” continued Donnie.

“And I had a big basket full of toys– little mice, squeaky toys, feathers, balls with bells, you name it, I had it. Even a little fur bird that chirped when I smacked it with my paw.”

“But the best thing was, that house was full of centipedes to attack. God that was fun, outsmarting those centipedes. I’d come up on one when it wasn’t suspecting, then stun it with my paw, like this– then play with it, you know, toss it back and forth for awhile– and just when it was hoping I was it’s friend, I’d swallow it.”

“I guess we may as well try to sleep before the kids get here,” said Blinky.

“Don’t you want to hear about how Sheila would brush me until my fur stood on end?”

Later the kids came, with their parents during visiting hours. They didn’t pay much attention to the older animals, like Blinky, Febe, and Donnie. They just wanted to play with all the young puppies and kittens.

Donnie tried to suck his stomach in and fluff his fur to look younger, but how could he compete with eight week old kittens? Even the sign that Marcy had put on his cage—“I’m Donnie Darko and I love to be cuddled” wasn’t catching anyone’s attention.

No one even asked for Donnie to be taken out of his cage.

Donnie missed being petted most of all. That was one thing about Sheila, she was always petting him and cuddling him. Every night, before she fell asleep, she would stroke Donnie’s fur. And give him kisses on his forehead. And say, “I love you, Donnie Darko.”

God he missed her.

Why had she brought him back here?

It was no use going over the past. He was here, and he was going to have to deal with it, like it or not. And work out a plan to get out.

Later, after all the kids had gone, he tried to nap, but Blinky wouldn’t stop coughing and sneezing.

“Hey, Blinky, can you be a little quieter? I’m trying to take a nap over here!”

“Sorry, Donnie, I’m just feeling kind of under the weather. I’ll try to stop, though.”

He worried about Blinky. Blinky was even older than Donnie, at least by four years. Blinky only had one eye, and was graying and thin, and no one ever asked to see him. Donnie didn’t know about Blinky’s past, Blinky never talked about it, and Donnie understood he shouldn’t ask.

When Donnie woke up, Blinky’s cage was empty.

“Hey! Did Blinky get adopted?”

“Well, wh–ere is he?” Donnie stammered.

“You know where. Gettin’a shot. The big sleep. You know.”

“Shut up, Febe! You don’t know anything! Just shut up!”

Donnie placed his paws over his ears. He couldn’t go on without Blinky. He really couldn’t.

Donnie didn’t eat that day, or the day after, or even the day after that. He couldn’t move. He tried to sleep, but couldn’t stop thinking about Blinky, and how he didn’t even get to say goodbye.

Marcy tried to tempt him with delicious wet food and treats, but they didn’t interest Donnie.

“Donnie, can’t you take a bite for me? Donnie, I love you! You’ve got to eat something.”

Marcy took him out of his cage and stroked his fur, and rubbed her face against his.

“He has a broken heart,” she told Sam. “He misses Blinky.”

“Blinky had to go to Rainbow Bridge, my man. Just this side of heaven is a place called Rainbow Bridge, there are meadows and hills– you can run, there is plenty of food, sunshine, water, everybody’s warm and comfortable. All of our friends who have been ill, Donnie, are restored to health– those who were hurt or maimed, like our boy Blinky, are made whole and strong again…”

Donnie fell asleep to the sound of Sam’s voice.

The next morning Donnie awoke to the sound of his cage door being opened.

He purred in Marcy’s arms, and wondered if the shot would hurt. He hoped it would be quick.

“You’re going on a little trip, Donnie!” Marcy said. Donnie snuggled in her arms. He was so tired.

“I hope you’re going to like your new home, Donnie! I have two other cats, and two dogs, but I think you’ll be happy!”

—
‘Donnie Darko’ is part of Kathleen’s short story collection, Aloha From Detroit, which is available from Kindle here, and will be released in a print version soon.

Also watch for a brand new heart-wrenching story in several weeks from Kathleen Crane at this site!