When they call code 99 the trick is to linger on what you’re doing just long enough to let the shoplifter get away. Then you come trotting up front, huffing and wide eyed, as if you’ve just come hustling all the way from the back and not like just from one aisle over.

“Was he on a bike or something? Guy is gone.” 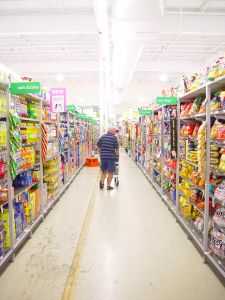 A popular thievery tactic is to grab full cases off the displays in the lobby and then just book it. Toilet paper, chips, bottled water, whatever. One time a guy rode his bike right into the lobby, stuck a case of laundry detergent under each arm and took off.

“Damn,” I said, arriving just in time to watch him wobble out of the parking lot. “That’s impressive.”

Even if I did manage to meet Mr. Thief face to face, nobody has ever made it clear what exactly we’re supposed/allowed to do to stop him/her. We damn sure can’t scruff them. We can’t touch them period. Even if we could, that’s a pretty quick way to get knifed. Knifed over bum-wipe: there’s a nice obituary.

But so if we can’t grab them or touch them, I don’t know how effectively we could block the door. You could stand in their way, but if you can’t touch them, what do you do if buddy puts his body into you? Take a step back and block the door with some stern words?

“Hey, buddy, you can’t leave with those.”

“Could you move, please?”

“I’ll move because I’ve been told I have to move, but I disapprove of all this.”

Someone said that since we can’t really do all that much to stop the actual shoplifter, we should just do what we can to stop the product from leaving the store, i.e. grab at the thing and have a sort of tug-of-war, I guess. That seems like it would end well. Seems like it would end with a knifing and a bunch of broken/spilled product on the floor.

Back before all kinds of budget cuts were made by head office, our store used to employ “floorwalkers.” I didn’t know what that meant either, at first.

“There’s this man in one of the aisles who’s been on his cell phone for like three hours. He’s had the same three things in his basket since he came in.”

Floorwalkers, unlike us emasculated clerks, are allowed to scruff the hell out of you if they see you slipping even a Cliff Bar into your satchel. They’re on their phone 99% of the time, pretending to be some yackety schmo, minding his own, and you think well hey, since there’s nobody important around, I’m just gonna plop this live lobster into my gym bag and― bam. They’ve got you in an arm bar.

Perhaps because of the unendurably long stretches of inaction, one of our floorwalkers, when he finally saw something going down, got a little over zealous. (Actually come to think of it, this whole incident might have something to do with why we don’t have floorwalkers anymore.)

It was a Saturday afternoon. A customer had a cart loaded up with meat, all the finest cheeses, baby formula and so on, and I guess since there was a long line she figured the hell with it ― she was gonna just stroll on out with it.

Our floorwalker saw her heading for the door, and he put her in a chokehold.

She started screaming, understandably. Another customer heard the commotion, ran over, and seeing just some plain clothed guy choking out a random woman, assumed the floorwalker was a psychopath. In one skillful motion (he was a black belt of some degree, we learned after) he took the floorwalker down. Like body slammed him.

“Code ninety ni-eeeeee,” the cashier screamed, as all this was going on.

The thief took advantage of the scuffle and tore ass out the door and down the street. When I showed up, late as always, the floorwalker had just gotten out from under the Samaritan Ninja (the Ninja let him up, just to clarify ― someone probably explained the occupation of the guy he was beating up.) His face was bright red. He eyes were wild.

“You,” the floorwalker shouted, pointing straight at me. “Let’s go.” And off he sprinted, assuming I was close behind.

A few people looked at me, wondering if I would run after him. I stood perfectly still, blushing. I mean the way I understood it, my job was just to keep the product in the store, and there it was, safely inside, the cart having been abandoned in the scuffle, so technically it wasn’t my place to go huffing and puffing after him, even if I wasn’t terrified of what might go down if we actually caught up to the woman. I pictured either getting knifed or drawn into some horrible security-guard-excessive-force lawsuit. So yeah, no thank you, I was going to just linger back here in the lobby and guard the abandoned cart or something.

And why did he pick flabby old me for backup? He already knew the Ninja could goddamn flatten a person.

James Guthrie’s work has appeared in Hart House Review, (Parenthetical), and Pithead Chapel, among others. He lives in Toronto with a librarian and three chinchillas.