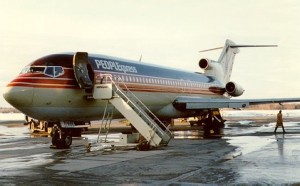 I’m fat, balding, and middle-aged. I’m married. My wedding ring is in plain view on my finger rather than a white scar where I’ve deceitfully taken it off. I have kind eyes, yet pretty women never sit next to me on airplanes, even when there’s a seat between us.

I think I look non-threatening, but maybe the fact that I appear non-threatening is a threat in itself. Perhaps it’s like an obvious attempt at deception that enhances the lethality of the thing it attempts to disguise, like camouflage on a nuclear missile. Or maybe I don’t come close to being non-threatening at all. Maybe I have that look of haunted desperation in my eyes of a middle-aged man who knows he’s long past striking up a romance with a pretty woman on an airplane.

When I was a teenager, I watched a pretty girl fall in love with a handsome boy next to me on a People Express flight from Pittsburgh to Newark, New Jersey, the happiest airport on Earth. This was right after the airline industry was deregulated, and anyone could afford to fly from Pittsburgh to Newark because the fare was only nineteen dollars each way.

I was fourteen years old. My parents were shipping me to my grandparents for a few weeks. “Shipping” is perhaps the wrong word. I wanted to go, and my grandparents were kind enough to schlepp from Long Island to Newark to pick me up. Maybe they wanted to see me too. I think my parents were tired of looking at me. As with all fourteen-year-olds, the feeling was mutual.

Age fourteen was my last good year. I’d peaked, and I never realized it until about fifteen minutes ago, because fifteen minutes ago is when I realized I’ll never have a renaissance. Even though I never thought it could happen, by the time I was fifteen I was fat, pimply, shorter than most of my classmates because they’d outgrown me and destined for a high school career that would be free of girlfriends and a life in which I could count my disastrous romances comfortably on one hand.

It was my first solo flight. I’d always flown with at least one family member, so I only had half the chance of sitting next to a stranger than I did flying by myself. When I boarded the plane, I took my assigned seat by the window in an aisle of three seats and hoped that the middle seat would be empty. Naturally, it wasn’t. A big handsome strapping hulk of a young man sat in the middle seat and immediately asserted dominance by taking over the armrest. In his defense, he really needed the room.

I’m getting ahead of myself.

My next hope was that the middle seat wasn’t booked, so maybe once the plane was boarded, he’d move over. If I was really lucky, maybe there was a whole row that wasn’t booked, and he’d change rows completely. Planes ran pretty emptily in those early days of deregulation. Instead, a steady stream of passengers filed onto the aircraft, and it was only a matter of time before the aisle seat was taken by a pretty girl who I’ll call Kate.

Kate was young, but she looked like she had her shit together. At fourteen, I wasn’t anticipating relationships that went much further than seeing my first tit, but I knew someday I’d want to see tits on someone who had their shit together the way Kate did.

Kate didn’t just slide smoothly into the seat. First, she tried to heave a carry-on into the overhead bin. Her bag was probably bigger than what was normally allowed. Pretty people live by a different set of rules by virtue of membership in a club I’ve never been qualified to join. She failed to stow her bag on her first attempt, but she didn’t look around for someone to help her. She was her own person – self-contained, not needing anything from anybody.

I was struck by how beautiful she was. She must have been all of twenty-five. She was slim, but not skinny. She was wearing a sleeveless blouse and a skirt that ended a few inches above the knee. She was proportioned. Athletic. Muscularly defined, but not ropey. She was blonde by genetics rather than chemicals. When she reached up to try once again to put her bag in the bin, she exposed her navel, and it was the best-looking innie I’d ever seen.

I was, of course, impressed to the point of overheating and wished I had a bookbag to put in my lap. Doug, however, was thunderstruck. I could feel it. I could almost hear the sizzle of lightning and smell the ozone in the air. After a few dumbfounded seconds, Doug jumped up to help her so quickly that she took a half-step backward out of sheer surprise, bumping into the person behind her.

Kate took Doug in with a fluid up-and-down look and melted past the borders of her self-sufficiency. She was no longer simply of herself. She was herself plus Doug. She flowed into a stance facing him although her body had been canted to the side seconds before. Their eyes met. It was more than sexual attraction. Simple lust was not applicable. It was love. Even at fourteen, I knew it was love.

At that moment I learned that nausea and jealousy can be concomitant emotions.

Doug didn’t ask permission. He simply picked up her bag and shoved it in the bin, and Kate admired him for it silently. Then he sat back down, and she sat next to him.

“Thanks,” she said, her words coming out more like a question as if she were unsure of exactly what to say in a situation where “thanks” was normally the exact the thing to say.

They didn’t shake hands. They were well beyond that.

“Are you going to Newark?” Doug asked.

“Do you live there?” Doug asked.

“You live there?” Kate asked.

“Yes. I was just here to see my parents,” Doug said.

“Oh,” Kate said. “That’s not so bad.” The wealth of assumption in her statement was not lost on Doug or me. “What do you do in New York?”

“I work for Bear Stearns. Money stuff,” he said dismissively. It didn’t matter. “What do you go to school for?”

“I’m working on my master’s in psychology.”

“How long until you finish?”

“This is my last semester,” Kate said.

I thought he would invite her to live with him in New York after she graduated, but he just let the unspoken invitation float there like a balloon that was almost out of helium. Even love at first sight has parameters, and, I suppose, an etiquette that must be observed.

They exchanged information and caught each other up on the mechanics of their lives as the plane began to taxi. They talked through the safety presentation, the wait on the runway, and, finally, the take-off. The increased noise in the cabin made it difficult for them to hear each other, so they took turns leaning their heads in toward each other as they spoke in poses as intimate as any kiss. I couldn’t hear them at all, but I could imagine what they were saying:

And I love you. I just knew it the moment I saw you.

What do we do now?

People Express was no-frills, and if you wanted a Coke, you had to buy it for fifty cents. I had been planning to do just that, but when the stewardess came around Doug and Kate waved her away, and I didn’t have the heart to interrupt the happy couple by passing things up and down the aisle in front of them, distracting them and wasting their valuable seconds. Fortunately, the flight was a quick up-and-down, and there was no chance of dying of thirst during the trip.

The plane landed and taxied toward the gate. The cabin noise was lower now, but I still couldn’t hear them because they were now speaking to each other in whispers, huddled up against each other, the armrest between them tucked away like a prison door that had been slid aside.

As soon as the seat-belt sign went off, they were up and in the main aisle. Doug brought down Kate’s oversized bag as well as his own, and as soon as the passengers began to de-plane, they were off.

I never wanted to see Doug and Kate again, so I waited to disembark until I was the very last person off the plane. I entered the terminal and found two very cranky-looking grandparents waiting for me.

“Where were you?” my grandmother asked.

“Don’t be the last one off,” my grandfather said.

“Someone has to be last,” I argued, unreasonably provoked by the possibility of being held accountable for something I couldn’t control, even though this particular instance had been my doing.

“Just not you,” my grandfather said.

Half-comically, I looked around the terminal for help. On a bench against the far wall, Kate and Doug sat, heads together, holding hands, the expressions on their faces ones of pain rather than joy. But I knew it was the good pain, the kind of pain worth enduring because of how good it feels when it’s finally gone.

Someday, I thought, it will be my turn. I gave Doug and Kate just one more glance before I followed my grandparents to baggage claim and forgot about them for thirty-six years.

That’s a lie. I never forgot them.

Doug and Kate must be in their early sixties now. Are they together? Do they delight in telling the fantastic story of how they met on a discount flight from Pittsburgh? Or did it end right then and there in Newark or somewhere in-between? There isn’t a lot I’d like to know about how the people who weave in and out of my life turn out in the end, but I really wish I knew what happened to them.

As I lived out the remainder of my teenage years and beyond, I convinced myself that love was a fleeting illusion that two people might share for a moment in time, but that no one would ever share with me. I married for companionship, divorced, married again for the same reason. I stopped caring enough to want to rearrange my life by divorcing again. When I thought of Kate and Doug, I told myself that they had emerged on the far side of their fantasy minutes or days or weeks or years later with nothing to show for it.

Now, sitting in this airplane, I like to think they made it.

There’s a pretty woman coming down the aisle, and she’s eyeing my row. She sits down next to me. 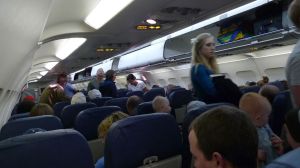 After a teaching career, Jason A. Feingold began writing, with works published in journals, anthologies, and collections. When not writing, he reads, keeps house, is a husband, raises a son, chases dogs, and volunteers as a Guardian ad Litem in his North Carolina home.